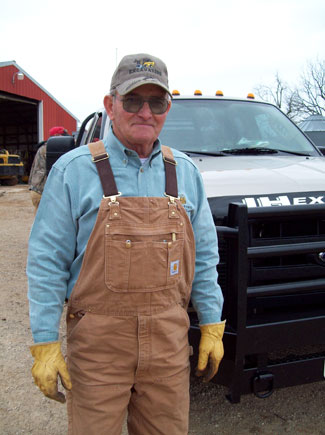 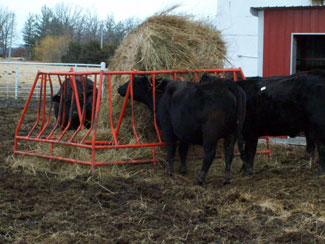 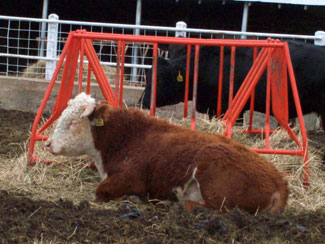 
When Joe Hardcastle took home a new insert for his GoBob hay feeders, he did not expect to be quite as impressed as he was. “I saw them at a Springfield show and brought one home to try,” he stated while standing in his barn, surrounded by trucks from his main business, JH Excavating. “After working with their demonstrator, I liked it so well, I immediately ordered four more.”

As Bob Studebaker, owner of GoBob Feeders explained, “we were one of the first to offer a hay conserving feeder and the first to offer a square-shaped feeder for round bales. Sometimes something new is difficult to get accepted by the public so we offered an unconditional money back guarantee, if the customer did not feed 25 percemt less hay than they were previously feeding with a ring feeder. This winter
(2008-2009) we have surpassed over 6,000 feeders sold since its inception. We now confidently offer the same money back guarantee and have upped the anty to 30 percent less hay fed. Joe Hardcastle was the very first to purchase one and then called back to order more.”

“I run about 140 cattle, on three different pieces of property,” Joe Hardcastle continued. “I came to Lebanon 40 years ago, working in the lumber industry, and now I run this.”
He waved an arm to take in the lot in front of the barn, filled with trucks of varying sizes and descriptions, all associated with excavation and construction. “I grew up on a farm in Ozark County, along the Missouri- Arkansas line. I did 4-H as a kid, and that life is something I’ve always loved. My wife,” he laughed. “She doesn’t care for the cows, but I do.” Sherrill Hardcastle runs her own monogramming business, all on the same property as Joe’s excavating business and the majority of his cattle.

“This is a hobby that I love. That’s the best way I can describe it,” Joe continued. “I moved to Lebanon from Springfield in 1969 and worked in the lumber yards for 26 years. You know, you’d go to work every day, with all the hustle, and have people yelling at you about this or that, but then to come home and work with the cows, now to
me, that’s relaxing. The only problem now, with these cell phones, is that they can find you anywhere, even out in the field. The only way you can truly find any peace is if you shut this thing off,” he added, as he pulled his cell phone out of his coveralls front pocket. He shook his head, with a smile. “I run a Brangus-Angus mix and breed
them to horned Hereford bulls, which I get out of Kansas, and that gets you black baldy calves. I’ve been doing it that way for years. I feed straight hay in the winter, with salt mineral range cubes and they winter real well that way. And the GoBob feeders, all I can say is that they really do save on the hay. There’s not a lot of money in the
cattle these days, but well, they really are my therapy at the end of the day.”

Back to Hay Conserver Bale Feeders